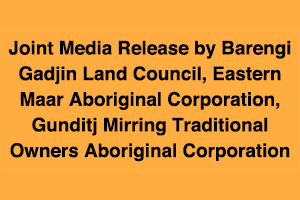 The three Traditional Owner Corporations have been working closely with Parks Victoria to undertake Aboriginal heritage surveys in key locations with significant recreational activity, particularly rock climbing. The results of those surveys are now being assessed.

As part of this process, representatives of the three Traditional Owner corporations, Gariwerd Wimmera Reconciliation Network (GWRN) and Parks Victoria have inspected two cultural places, the Gunigalk area in northern Gariwerd, at a location known to rock climbers as Taipan Wall, and in the Bugiga area in central Gariwerd, at a place known as Bundaleer. The inspection was to assess the immediate management needs of those locations, to ensure Parks Victoria is complying with their responsibilities under the Aboriginal Heritage Act to protect the Aboriginal cultural heritage values while the longer-term recommendations for their management are being considered.

The outcome so far, which is to temporarily restrict public access to Taipan Wall and a part of the Bundaleer due to the potential of harm to the cultural values at these sites, is supported by the three Traditional Owner corporations as both necessary to comply with the Aboriginal Heritage Act, and to meet the minimum expectations of Traditional Owners.

The input from members of Gariwerd Wimmera Reconciliation Group has also greatly informed considerations by providing practical knowledge of climbing routes and climber perspectives of these places, and has fostered an understanding which has enabled informed decision-making on where cultural values and recreational uses may be able to co-exist.

Officials from the three Traditional Owner corporations recognise the concerns and uncertainty that exists amongst recreational users, particularly rock climbers, resulting from current and potential changes in accessibility to such locations, and with no definite timeframes for full resolution in place. It is important to state that this isn’t about trying to close down recreational activities such as climbing across the whole of the Gariwerd landscape. In fact, the ongoing assessments are a necessary management process, required under legislation, to ensure the protection of cultural heritage which then will lead to greater certainty in future for recreational users when carrying out their activities.

Traditional Owners ask for patience and understanding from the public during this period of adaption.

“GMTOAC have worked alongside BGLC and EMAC for the protection and management of cultural heritage and rock art sites across the Gariwerd landscape and supports Parks Victoria in their statutory role upholding the Aboriginal Heritage Act 2006. GMTOAC appreciates the insights and involvement of the Gariwerd Wimmera Reconciliation Network in explaining rock climbing practices, which can lead to further conversations about potential solutions. All Victorians have obligations in protecting cultural heritage and rock art as once it is harmed or destroyed, it cannot be replaced”.
Damein Bell – CEO, Gunditj Mirring Traditional Owners Aboriginal Corporation.

“Eastern Maar Aboriginal Corporation welcomes the decision by Parks Victoria to temporarily restrict public access to two areas in the Grampians (Gariwerd) National Park – the Taipan Wall and a part of the Bundaleer area – which are rich in Aboriginal cultural heritage. The protection of these areas is paramount, enshrined in law and absolutely non-negotiable. This decision will prevent further destruction, until a plan can be agreed upon which balances recreational use and essential cultural protection.

“We welcome the action to protect the significant Aboriginal cultural values in the Gariwerd cultural landscape, which to us is vital and long overdue. We also value the working partnerships that have been formed with the other Traditional Owner corporations, Parks Victoria and climbers through Gariwerd Wimmera Reconciliation Network, which will result in a more equitable balance between cultural values protection and recreational use in this sacred landscape.”
Stuart Harradine – BGLC Manager of On Country Operations.