The Eastern Maar are Traditional Owners of south-western Victoria. Our land  extends as far north as Ararat and encompasses the Warrnambool, Port Fairy and Great Ocean Road areas. It also stretches 100m out to sea from low tide and therefore includes the iconic Twelve Apostles.

“Eastern Maar” is a name adopted by the people who identify as Maar, Eastern Gunditjmara, Tjap Wurrung, Peek Whurrong, Kirrae Whurrung, Kuurn Kopan Noot and/or Yarro waetch (Tooram Tribe) amongst others, who are Aboriginal people and who are:

• descendants, including by adoption, of the identified ancestors;
• who are members of families who have an association with the former Framlingham Aboriginal Mission Station; and
• who are recognised by other members of the Eastern Maar People as members of the group.

Eastern Maar Aboriginal Corporation (EMAC) is the professional organisation that represents the Eastern Maar People of South West Victoria and manages their Native Title rights and Interests. EMAC has a board of directors of Traditional Owners and is a registered organisation under the Corporations (Aboriginal and Torres Strait Islander) Act 2006 .

Each of the 12 identified Eastern Maar family groups has a position the board. Directors have two year terms.

In July 2011 the Eastern Maar and Gunditjmara peoples were recognised as the native title holders for an area of their Traditional Country in south-west Victoria between the Shaw and Eumerella Rivers and from Yambuk in the south to beyond Lake Linlithgow in the north. 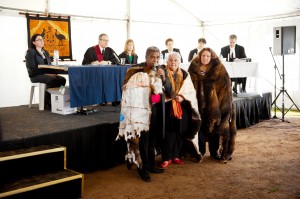