The significant status recognises Eastern Maar as the primary guardians, keepers and knowledge holders for the management and protection of Aboriginal cultural heritage within the determined area. 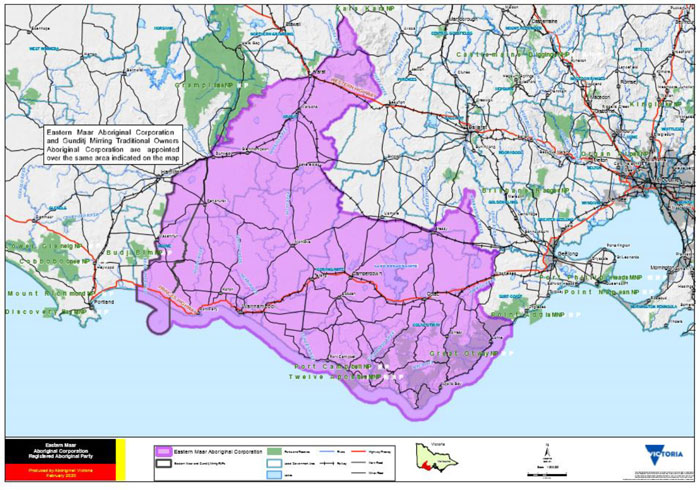 The determined area extends along the coast from east of Port Fairy to west of Anglesea and extends inland to include the Great Otway National Park and the townships of Warrnambool, Terang, Mortlake, Camperdown, Colac, Apollo Bay, Lorne and Cressy.

Eastern Maar Aboriginal Corporation Chair Jason Mifsud said this is a significant step in the right direction and one that validates our long-standing responsibility for caring for our Country for thousands of years.

“Our traditional lands are alive with dreaming and creation stories; and imprinted with our social history and cultural values,” he said.

“While the road to recognition has been a long-travelled path, we feel that recognition has effectively elevated our voice and rightful standing on the protection and management of cultural heritage places, objects and landscapes on our traditional lands and sea Country.

“This accomplishment is due to the vision, wisdom and grit of our Elders who have never stopped in our fight for recognition. But also, for the determination of our knowledge holders for their skill and hard work of our Board and management who have worked tirelessly throughout this journey.” This decision, made by the Victorian Aboriginal Heritage Council, will help underpin Eastern Maar’s ongoing settlement and native title negotiations. It comes two years after Eastern Maar decided to formally begin negotiations with the Victorian Government under the Traditional Owner Settlement Act 2010 which is an out-of-court settlement process recognising the rights of Traditional Owners.

Eastern Maar also has a native title claim underway in the Federal Court under the Commonwealth Native Title Act 1993 that was first lodged in 2012.