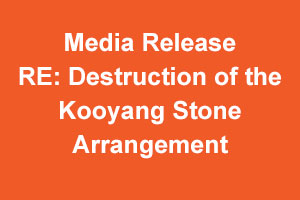 Traditional Owners have been traumatised following the destruction of part of an ancient ceremonial landmark, the Kooyang Stone Arrangement, at Lake Bolac over the long weekend.

Authorised Officers from Aboriginal Victoria utilising enforcement provisions provided under the Aboriginal Heritage Act 2006 are investigating the circumstances that led to the apparent removal of an estimated 60-metre section of the 176-metre eel-shaped structure, which is formally registered as an Aboriginal place on The Aboriginal Cultural Heritage Register and Information System (ACHRIS) and is highly significant to Traditional Owners.

Eastern Maar Aboriginal Corporation, the Registered Aboriginal Party responsible for cultural heritage protection and management, alerted Aboriginal Victoria to the destruction and is assisting with the investigations. Initial inspections by Eastern Maar Officers reveal that the entire tail portion of the eel has been removed.

It is an offence to cause harm to Aboriginal cultural heritage under the Aboriginal Heritage Act and substantial penalties can apply.

Statement from Eastern Maar Aboriginal Corporation:
We cannot understate the importance of this site or the devastation that this destruction has caused.

The stone arrangement at Lake Bolac is steeped in cultural and historic importance and was a major gathering place prior to European colonisation. Different language groups and different nations came to this space to celebrate the life cycle of eels, which are of great cultural importance and the basis for an entire aquaculture industry.

It is traumatic and heartbreaking to see such an important place that is considered vital to the identities, histories, practices and well-being of our people in the state that is in.

We were swift in referring this matter to Aboriginal Victoria, the regulator responsible for carrying out investigations of this nature.

We will continue to keep watch and await the outcome of Aboriginal Victoria’s investigation into the factors and circumstances that led to the damage.